In July, 2010, for reasons I could not then explain, I had this strange and powerful feeling that I was supposed to leave California, head out east and live in a cozy cottage on the beach.

The thing is, I was married. Happily so. And I had no desire or intention of leaving my family behind. So instead, I sat with the feeling, trusting that the true meaning behind it would be revealed.

After spending the weekend at my sister’s house, along with two of my other sisters and a few nieces, I came home and started journaling. I wrote about this compulsion to pack up the Prius with meager possessions (part of the vision) and skip town in the middle of the night.

And then? Something amazing happened.

Sometime later, my husband came into the room. “Are we going to have dinner tonight?” he asked.

I blinked, and for the first time noticed that the room was nearly dark. I glanced at the clock on my laptop computer, which confirmed it was evening. I’d started writing in the early afternoon.

I looked at the page count and saw that I’d written nearly sixty pages. Of what, I had no recollection. I slapped the laptop shut and went downstairs to make dinner. Later that night, I read what I’d written.

It was the first sixty pages of a story. A story I wanted—needed—to keep writing. And so I did.

Every weekend for the next three months, I wrote. In secret. I wrote and wrote until I’d finished telling the story of Kate Anderson and Jesse Moretti. Kate, as it turned out, left California and her (dead) husband behind and moved to Cape Cod where she lived in—wait for it—a small cottage on the beach where she found herself—and love—with a handsome doctor despite her vow to never love again.

And I knew. The feelings I’d been having were not the universe telling me to leave my family and head east. They were the urgings of my heart telling me it was time. Time to fulfill my destiny of becoming a storyteller. Of becoming an author.

It took me a while to confess my newfound passion to my husband (who couldn’t have been more supportive), and even longer to say the words out loud:

I am a writer.

Seven years later, they are the first words out of my mouth when asked what I do (for a living), despite the fact that I still have a full-time job (as an accountant).

The book, by the way, is yet unpublished. I wrote it before I knew anything about writing and I’m afraid to find out how bad it might be. But some day, I will dust it off and bring it to life.

The Sisterhood of the Traveling Book 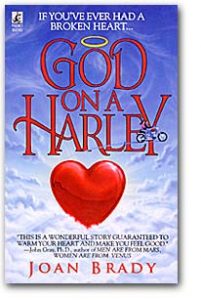 After I’d finished writing my first book, it occurred to me that the story was inspired by my favorite book in the entire world: God on a Harley, by Joan Brady. It’s a fun, short (140 page) read that every woman (regardless of their religious beliefs) can relate to.

Christine Moore has a world-class case of burnout: a frustrating career, a few dead-end romances, and a less-than-perfect figure. But when God, who appears as a hot guy on a 1340cc Harley-Davidson, mysteriously shows up, Christine’s life changes forever.

And yes, it involves a cozy cottage on the beach.

Recently, I lent the book, pages now yellowed by time and love, to a good friend. When she returned it to me, I thought about all the people I’d lent the book to in the fifteen years or so since I bought it.

And then an idea struck me.

What if, rather than suggest that you go buy the book for yourself, I was to lend it to you? One at a time? And when you finished reading it, you would send it along to the next person. You’d send me a picture of yourself with the book, which I could share each month in my newsletter, and we could track where in the world God has been the previous month.

Wouldn’t that be fun?

Here’s how it will work:

If you’re interested in participating, send an email to me at: SuzanneWVince@Gmail.com. In the subject line, please note: God on a Harley, and be sure to provide the mailing address where I can send the book.

Note: Due to international postage rates, I have to limit this project to US and Canadian residents only.