← Week 4 Post Mastectomy: Flashbacks, Dr. Evil Returns and Back in the O.R. Again

From the Ashes of Pain Comes Great Writing →

The Case of the Suspicious White Powder

Several months ago at work I met with a safety shoe vendor who wants our safety shoe business. I really liked the company because they were a family-owned business and have been around for a long time, so I knew if I had billing issues they weren’t going anywhere.

Anyway, I got to talking to them about these callouses I have on the bottom of my feet from years of running. They are smack dab in the middle of my forefoot, in the exact same place on both feet. So Adam, the owner, said he had just the product for me, and he said he would send it to me in the mail.

Two weeks later I received a call from the Chief of Security for the company I work for. It seems there was a small, suspicious looking box with white powder all over it sitting on top of the UPS boxes that had been delivered, and the person receiving the UPS packages does not remember this being one of them. They could see that the box was addressed to me but could not tell who it was from.

Apparently the entire security team then donned their haz-mat suits, including masks and gloves, and investigated this suspicious white powder and determined that it was not, in fact, hazardous material. So the box was then opened, the contents pulled out and delivered to me. Here is how it arrived: 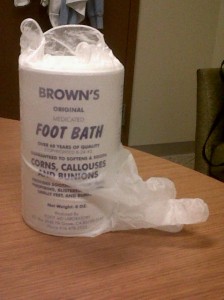 So now the mystery has been solved. The suspicious white powder is indeed, Brown’s Original Medicated Foot Bath. Guaranteed to soften and soothe corns, callouses and bunions (bunions, oh, I have those too…yippee, maybe this will cure those too). Guaranteed, or what, my money back?  I can see that happening.

What about you? What is the strangest thing you’ve ever received in the mail? I want to know!

I love hearing from you. And to prove it, for every comment you leave, you’ll be entered into a drawing. At the end of the month, I will draw a lucky winner who will receive a $10 gift card (your choice, Amazon, Starbucks or iTunes). Winners will be announced in the first post of the following month.

6 comments on… “The Case of the Suspicious White Powder”

← Week 4 Post Mastectomy: Flashbacks, Dr. Evil Returns and Back in the O.R. Again

From the Ashes of Pain Comes Great Writing →