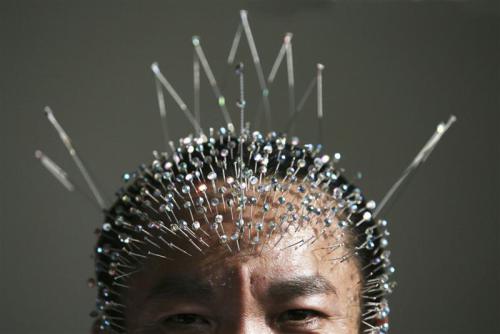 Acupuncture is among the oldest healing practices in the world. As part of traditional Chinese medicine, acupuncture aims to restore and maintain health through the stimulation of specific points on the body.

Last year, after suffering from chronic pain in my lower back and left scapula for more than a year, I decided to give it a whirl. I’d tried everything else I could think of, but so far, nothing had worked. So I asked around, found just the person, and made my appointment.

After a lengthy questionnaire and a physical examination, Dr. Wu recommended a 3-step treatment. We would start with a technique called Scraping, then Cupping, and if I was still in pain, she’d pull out the big, bad 7-Star Needle. I didn’t even want to ask.

The process of scraping is moderately painful, but I’m pretty tough so I sucked it up like a champ. Until later that night when I was changing into my jammies and my husband nearly shrieked. “What? What is it? Is there a bug crawling on me?” I asked. “What the hell happened to you?” he asked. I looked at my back in the mirror and what I saw was something similar to this:

Cupping is another method aimed at mobilizing the blood flow in order to promote healing. It’s not nearly as painful as the scraping, but it does involve fire. I don’t like fire. Well, I do, just not anywhere near my skin. Since I had no clue what they were actually doing, I downloaded the following video to see what it actually entailed:

I had lots of cool-looking circles on my back afterward, and this time I forewarned my husband that I’d been to Dr. Wu that day.

A week later, my pain had not receded in the least, so Dr. Wu pulled out the big guns, also known as The 7-Star Needle. Before I laid myself face down, I glanced over at the table at the 7-Star needle. Big mistake. Now I was afraid.

The process, which is clearly modeled after ancient blood-letting, went something like this: jam the needle into the affected area, wait for patient to stop screaming, suction off blood, repeat several more times.

After only one round (there were two more to come), I decided that acupuncture was not for me and I would not be coming back to see Dr. Wu again. Ever.  Assuming, of course, that I still had any blood left in my body and was actually able to escape my torturers.

How about you? Have you tried acupuncture? Have you achieved success with it? I want to know!

Leave a comment and you’ll be entered in a drawing for a chance to win a $10 gift card (your choice, Amazon, Starbucks or iTunes) at the end of the month. Winners will be announced following the first post of the following months.