← Bionic Boobs and How I Lost My Mojo

Life Lessons from a Golf Caddy → 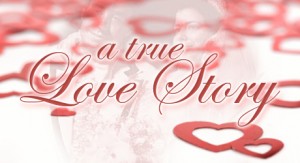 In honor of St. Valentine’s Day, I thought I’d share one of my favorite, real-life love stories. It’s the story of my friends Kate and Kyle.

On February 23rd, 2001, Kate was soaking in the bathtub, lamenting her pathetic life. She was stuck in a job she hated but couldn’t leave because she had a mortgage to pay, and she was nursing a broken heart. Life just couldn’t get any worse. Or so she thought.

She reached for a towel just as the phone rang. She raced to the phone, leaving a trail of water behind her, and sighed in disappointment when she heard her sister’s voice on the other end. Even though she knew it was over with Jim, she still got her hopes up every time the phone rang. “Oh, hi Mare, what’s up?”

“It’s mom. Dad found her unconscious when he got home and he took her to the emergency room.”

Kate drove as fast as she could to be by her mother’s side. They had always shared a special bond. The next several days were a nightmare. Her mother slipped in and out of consciousness. After five days, the doctors told Kate and her family that they believed her mother had a condition called Hepato-Renal Syndrome—total liver and kidney failure, and 100% fatal.

A confirmed diagnosis of hepato-renal syndrome is made, they said, by eliminating all other possibilities, which meant they wouldn’t know for sure for a couple of days. The next day, Kate sat by her mother’s bedside holding her hand, and smiled into her mother’s blue eyes. “Good morning, sunshine,” Kate said to her mother, who hadn’t spoken in more than two days.

Her mother lifted the oxygen mask from her face and gripped Kate’s hand tightly, pulling Kate toward her. She leaned in to hear her mother’s words. “I’m sorry things didn’t work out with Jim, but one day very soon you’re going to meet someone special. Someone who deserves you. Someone who you’ll spend the rest of your life with.” She placed the mask back over her face and closed her eyes.

They were the last words Kate’s mother ever spoke, and Kate didn’t share them with anyone. She kept them to herself. They were like a gift her mother had saved just for her.

Her mother’s funeral was presided over by Father Shule, a member of the Chaplain Corps of the United States Navy. The Chaplain Corps also provides chaplains to the United States Coast Guard, of which Kate’s mother had proudly served during World War 2 as a SPAR (Semper Paratus Always Ready link here). Kate’s sister, Marianne was a civilian dental hygienist at the U.S. Coast Guard base in Two Rock, California, where Father Shule served as the base Chaplain.

After the funeral, Kate’s father made a donation to the Lighthouse Chapel on base, and Father Shule used the money to have a plaque made in Kate’s mother’s honor, and hung it in the Chapel.

Two months later, the phone rang, and once again it was her sister, Marianne. “You won’t believe what happened today,” she said. 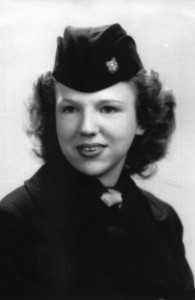 That day, Kyle Emmerson came in and sat down in her chair. As Marianne readied her instruments, a picture of her mother—in her US Coast Guard dress uniform—clattered to the ground. “The hair on my arms stood up, Kate, and I heard mom’s message as clear as though she were standing in the room.”

Kate hung on every word her sister spoke. “Well, what’d she say?!!”

Kate sat down hard in the chair behind her, her mother’s words echoing through her mind. One day very soon you’re going to meet someone special. Someone who deserves you. “And what did you do?”

“I told him about you. He said he’s not interested in dating anyone because he just got divorced.”

“I got his email address and told him you would write. I told him that I couldn’t explain why, but that I thought it was very important for you two to meet.”

Kate told her sister about her mother’s final words. “Oh my God, I didn’t know,” Marianne said. But Kate did. She knew this was the man her mother told her about. Her mother was so proud of her service to her country, and it made perfect sense that she’d pick a fellow “Coastie” for her.

Kate wrote to Kyle and they hit it off immediately. They exchanged pictures and Kate smiled when she got her first glimpse of Kyle. “Thanks for picking a cute one, mom,” she whispered.

After two weeks of daily emails, Kate received the following email from Kyle.

I went to see your mother today. She’s beautiful. I asked her if it would be okay if I asked you out, and she gave me her blessing. So, will you?”

Kyle took Kate to a baseball game on May 28th. Though her heart was still heavy with grief, Kyle was sympathetic and patient. He held her when she cried in the middle of Starbucks on their second date, and eight months later he married her on a private beach in the Turks and Caicos. Her mother was the only invited guest. 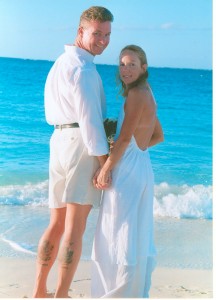 Epilogue:  Twelve years later my husband and I Kate and Kyle are still together and happy. Together we they have four furry children and a 15 year-old daughter (his from his previous marriage). We They both believe very strongly that my Kate’s mother is responsible for bringing us them together.

What about you? Do you have any great love stories to share?

← Bionic Boobs and How I Lost My Mojo

Life Lessons from a Golf Caddy →