← I Take You to be My Wawfully Wedded Wife

Your Daily Dose of Inspiration →

Writing is an Endurance Sport 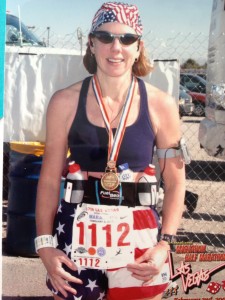 I started running in 2001. The first time I ran, I huffed and puffed my way to the corner and back and wondered what in the heck I was thinking. The next day wasn’t much better. But then, Rome wasn’t built in a day. And I was not a quitter (except when I tried to golf).

In 2003, I ran my first marathon. In the two years since I’d begun running, I’d logged over a thousand miles, gone through a dozen pairs of running shoes, incurred at least seven of the ten top running-related injuries, and experimented with every imaginable form of nutrition.

I read every magazine made for runners and triathlete’s, and scoured Mental Training for Peak Performance for tips on how to avoid hitting The Wall (also known as the 20-mile marker).

I was as prepared for Race Day as one can be.

Or rather, I should say that I was prepared in all the ways a runner could be prepared. And then, everything that could go wrong, did:

Two days before my husband and I were scheduled to leave for Las Vegas, my father had a heart attack. He’d been battling esophageal cancer for a year at that point, and the doctors said he wouldn’t last the day. My father did make it through the day, and the next, and he encouraged me to do the marathon.

Three days before the marathon, I came down with a bad head cold and a nasty cough. I bought some Dayquil and sucked it up.

The night before the marathon we watched the weather report for the Big Day. Forecast called for 35mph sustained winds with gusts up to 50 mph.

The following morning, as the bus drove us 26 miles out of town to the starting line, I took another swig of the Dayquil, tightened the IT Band straps above my knees and prayed for mercy. When we stepped off the bus, the wind nearly knocked us down. 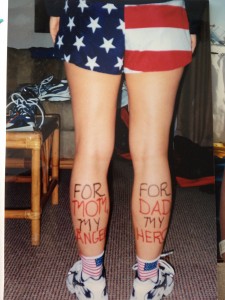 I glanced down at my calf, in which I’d written For Dad, My Hero and thought about how much suffering he’d endured and about how much I was about to suffer, and suddenly I knew that no matter how hard it got, I would not quit. I would do this for my dad.

Running 26.2 miles in 35mph sustained headwinds is like pushing a Buick through a mud pit. I cursed for the first ten miles, cried for the next ten and then stopped at the dreaded wall. I could go no further.

Doubled over, shoulders shaking from big angry sobs, I felt a hand on my shoulder. I looked up and into the face of my good friend, Kainoa. She and her husband had just finished running the half marathon. “Come on,” Kainoa said, “I’ll run the rest of the way with you.”

I glanced down at my other calf in which I’d written, For Mom, My Angel (she’d passed away two years prior) and smiled for the first time that day. “Thanks, Mom,” I whispered.

On the bus back to the hotel, we sat across from a guy for whom this was his 50th marathon. “I’ve never seen anything remotely like this,” he said. “Hardest marathon I’ve ever run.” He looked at my face, caked with dirt and streaked with tears and declared, “If you can do this, you can do anything.”

Two days later I sat in front of my father and placed my finisher’s medal around his neck. “You earned this, Dad,” I said.

Three years later, after running the Chicago Marathon, I suffered a devastating injury. For the next 18 months, I could not exercise at all. Nothing. Nada. And it became clear that my (very amateur) endurance sports career (I also enjoyed doing Triathlons, and had recently finished my first Ironman) was over.

Calling on my mental training, I began to meditate in an attempt to silence the obsession passion that had consumed me for the past six years. And once I was able to quiet my mind, a new passion arose: Writing.

And after completing four manuscripts, I realized that the process of writing a novel is very much like preparing for a marathon:

In running it’s all about logging miles. In writing, words.

In running you must feed your body the proper nutrition. In writing, proper nourishment comes in the form of lessons on craft (through books, classes, conferences and the like), the support of a writing group, and a good critique partner.

In running you must train your mind to ignore the pain. In writing you must learn to ignore your inner critic, thicken your skin, and buy a pair of Big Girl (or Boy) undies.

Are you a runner? What is your greatest running achievement (even if it’s only to say you set a PR—personal record—on your run to the corner and back).

Are you a writer? What personal accomplishment in your life prepared you for becoming a writer?

8 comments on… “Writing is an Endurance Sport”

← I Take You to be My Wawfully Wedded Wife

Your Daily Dose of Inspiration →