← How to Cover Up a Bonehead Move 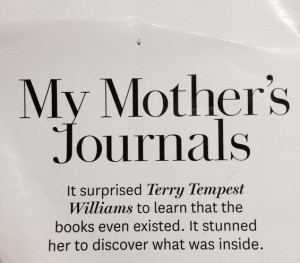 A few years ago I read an article in O Magazine about a woman (Terry Tempest Williams) who, while cleaning out her mother’s home after she’d passed away, found several stacks of journals. My heart quickened at the thought, at the very idea that her mother had left behind a secret stash of books containing her most private thoughts, memories, and experiences. What I wouldn’t give to find just such a treasure-trove from my own mother.

I scanned the article, fast-forwarding to the part where Terry sat down to open the journals. I waited with baited breath to read about her mother’s innermost thoughts, her deepest and darkest secrets, or maybe even a secret life that her daughter knew nothing about. After all, this was a multi-page article in O (as in Oprah) Magazine! There just had to be something juicy in those journals. Didn’t there?

Apparently not. My mouth fell open when Terry opened journal after journal and found…wait for it…blank page after blank page. I was, to put it mildly, disappointed. More than that, I was heart broken. And so I tore the first page of the article out of the magazine and put it in a box, determined to write the words in those journals myself one day.

Fast forward another year or so. I was looking through some of my mother’s photos and came across the picture you see above. I remembered my mother speaking of Mac a time or two, but I didn’t know whether he had been just a friend or a former flame.

I set the photo apart from the others I’d been looking at, and over the next few days I began to imagine a wartime love affair between Mac and Virginia (the fact that my own mother’s name had been Virginia was merely a coincidence). It would be a powerful love, but a forbidden one because Virginia is a nun. Eventually she will leave the convent, but before they can marry, the Japanese attack Pearl Harbor and Mac will heed the call to duty.

Around this time, the torn page from the O Magazine resurfaced and I knew I had found the words to fill the blank journals. My Mother’s Journals begins with the story of Olivia Hunter, whose life is in a downward spiral. As she struggles to come to terms with her husband’s infidelity, her tough exterior begins to crack and the events of the past few years (including the loss of both parents, a near-term child and her career) bring her to a breaking point.

When a stranger appears and delivers a box containing a set of her mother’s journals, Olivia begins to fit the pieces of her life back together and learns that life does not always work out the way you plan, that everyone makes mistakes, and that sometimes the person you need to forgive the most is yourself.

And so, I would publicly like to thank Terry Tempest-Williams’ mother for leaving behind a set of blank journals. For without them, this book may never have come to be.

Get Your Copy Today

Excerpt from My Mother’s Journals:

Today is the day that began the slow unraveling of everything I’ve always thought I wanted for my life. It’s been a year since I’ve seen my family, and until I set foot inside my parents’ house, I had no reason to believe that this visit home would be any different from the ones before. But then, I hadn’t counted on my brother bringing home a friend he’d met at Boot Camp.

Somewhere in the recesses of my mind, I can hear my brother saying, “Mac, this is my…um, this is Sister Marie Francis,” but I am already somewhere else. Somewhere I have no business being. And when Roger “Mac” MacKenzie takes the hand I’ve placed in his, something inside me stirs. My soul, I think. Yes, it must be my soul.

His eyes are the color of the sky that’s been scrubbed free of clouds, and when they look into mine, it feels as though they are reaching inside me and touching a part of me that has never been touched before. By anyone. I feel bare, exposed, as though with just a glance he knows everything there is to know about me.

Suddenly, I am aware of my surroundings. Of other people watching us. My brother, my parents, my chaperone from the convent. My cheeks burn with embarrassment as I struggle to regain my composure and my breath, which has somehow managed to drain entirely from my lungs.

“Pleased to meet you,” I say to my brother’s friend, and hurry away on wobbly legs into the kitchen to help my mother with the final preparations for supper.

As we sit down to eat, I can feel Sister Ruth Paul’s eyes bore down on me, watching my every move, so I try hard not to look at Mac and focus my attention on my brother instead.

Up to this point, enlistment in the military has been voluntary, but rumor has it that the draft is coming soon. We are all proud of Francis for volunteering, but the deepening crease of my father’s forehead tells of his concern. Over supper, the men speak of the activity in Europe and Asia, and the inevitability of America joining the war effort.

My mother eats quietly, but I can see her discomfort mounting as the conversation grows more serious. It’s a troubled time. Not just for our country, but for my family, and others like ours.

After we finish eating, the men take their conversation into the living room while the women do the dishes. Afterward, Francis and Mac go out for a while and I make my way upstairs to bed. My brother gave Sister Ruth Paul his room, and after bidding her goodnight, I collapse into the comfort of my childhood bed.

As I pull the covers up to my chin and stare into the inky darkness, I try not to think about how I’d embarrassed myself earlier at the sight of the handsome young soldier in uniform my brother brought home for dinner, but find it impossible. I’d acted like a blushing schoolgirl, and my body prickles now with the heat of my shame.

Unable to sleep, I sigh heavily and climb out of bed, bend to my knees and pray for forgiveness. As a nun, I’ve taken a vow of chastity, which means I promised to be pure in mind and body. A vow, it seems, that I am violating despite my best efforts to the contrary.

When I finish my prayers, I climb back into bed and close my eyes, but images of Mac force them open once again. I toss and turn, and after about an hour, I finally give up. I climb out of bed, slip into my housecoat and go downstairs for a glass of warm milk.

I turn on a small lamp and retrieve the milk from the icebox. After I pour some into a copper-bottomed pan, I place it on the gas range. I add a dash of vanilla extract for flavor, swirl the milk around with a wooden spoon and lose myself in my thoughts.

“Hello,” a voice from behind me says.

It’s a quiet voice, but it may as well be a shout for the effect it has on me. I stifle my scream and turn with a start. There, across the kitchen table, is Mac, the hint of a smile on his face.

6 comments on… “My Mother’s Journals”

← How to Cover Up a Bonehead Move