Confessions of a Recovering Slob

In Alcoholics Anonymous, when someone stops drinking they are referred to as a recovering rather than a recovered alcoholic. I’m surmising the theory behind this is that there is finality in the word recovered, so if a person drinks again, they are no longer recovered. Same can be said for overeaters, gamblers and, well, slobs (*raises right hand*).

Personally, I prefer the term “clutter addict”. I think it’s more politically correct. And it sounds more…gentle. Don’t you think? Now, I know you may be thinking, Suzanne, let’s just call a spade a spade. But bear with me. There is a difference between slovenliness and laziness. See for yourself:

For years now (thirteen to be exact), every room in my house looked something like this. One half being his, the other being mine:

Until my addiction to Home & Garden TV (HGTV).

Two years ago, while home recovering from breast cancer surgery, I became addicted to HGTV. While my most recent obsession is Fixer Upper, I also love Rehab Addict, Flip or Flop and Property Brothers (to mention but a few). The thing I love most about these shows is how light and airy (translation: neat, tidy, clutter-free) the home is when it’s finished.

As I looked around at the stacks of stuff (magazines I intended to read…someday, Soduku puzzles, catalogs with beautiful furnishings and decorative ideas) littering tabletops, countertops and desktops, I started to feel…heavy. Burdened.

Over the next year, the feeling grew worse. A major project at work stole every last ounce of energy I had, as well as the time I used to spend doing things I enjoyed. Things that brought me joy. I was completely overwhelmed by the mountains of unread magazines, junk mail I needed to sort through, and piles of clothes (and other stuff) I hadn’t had time to put away. Even my email accounts (I have four, including work) were jammed with messages (mostly junk) that I didn’t have time to delete or respond to.

The time had come to take drastic action. I had to eliminate the Overwhelm from my life.

Here’s how I did it. 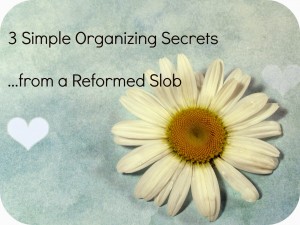 Step One: Attack The Email

Most of us, whether we’re willing to admit it or not, spend far more time in cyberspace than we should (winking at ya, babe). You can reduce that time significantly simply by reducing the number of emails you receive.

The first thing I did was unsubscribe to every unwanted email I’d received in the previous 90 days (yes, I was backlogged that far). I could simply have chosen to delete them, but then, like ants, they would just reappear. Instead, I pulled out the Raid and got rid of them permanently. (Note: in some cases the emails will continue to come. You may have to write them a friendly little reminder that you do not EVER want to hear from them again.) The relief I feel now when I open my email and see only those I want to see was worth the time and effort I spent doing this.

The second thing I did was to unsubscribe from the blogs and newsletters I no longer read because I either don’t have the time or I’m no longer interested in the subject matter (mostly the former). This includes blogs written by friends, people I care about, even people who might be subscribers of this blog. But there are only so many hours in a day. Something other writers understand all too well.

Lastly, because emails, like rabbits, tend to multiply and reproduce quickly, I make it a practice to unsubscribe immediately to any uninvited or unwanted email.

First it’s important to understand the difference between tidying and decluttering.

Tidying is the act of bringing order to or neatly arranging  your stuff. Decluttering means to remove unnecessary items.

Have you ever noticed that within days (hours, even, if you have children) of tidying your home, the clutter seems to have spread all over again? The reason is that you have not reduced the amount of stuff you have. You’ve simply shuffled it around in a naive attempt to bring order to the chaos.

When my husband and I were done decluttering our house, we nearly filled our garage with bags of clothes, boxes of kitchen stuff, books, and other miscellaneous items. It was, well, liberating (except for the part where my husband accused me of going too far by throwing away a couple of chicken bones).

Here are a few tips on how to do this:

Step Three: Learn to Say No

I read a book recently called The Sweet Spot: Finding Your Groove at Home and Work by Christine Carter. In it, she recommends making a list of your top five priorities in life and spending 95% of your time doing them. That means only 5% for everything else. For some, this may sound drastic, if not impossible.

Most women I know have a hard time saying no when people ask them to do something. Sure, I’ll be President of your committee. Come to your fourth Tupperware party (this month)? No problem, what are best friends for? Sure thing sweetheart, I will gladly drive you and your friends to soccer practice—today and every day—no need for the other parents to pitch in and help once in a while.

Surprisingly, this one was easy for me. My husband, being in the military, is away from home a lot. Thankfully, he’s home most weekends. My family and friends understand that my weekends are sacred.

Life is short, why drudge through it tired and resentful? Saying no won’t make you a bad person. In fact, it will make you a better person. You’ll have more time and energy for your family, your work, and yourself.

I wish I’d taken Before pictures to show you the comparison, but here are a few After photos.

Now that I’ve eliminated the clutter from my house, I feel light of spirit. Like a heavy burden has been lifted. It’s easy to put something back where it belongs. It’s easy to keep things tidy. Even for a recovering slob.

What about you? Do you feel overwhelmed by stuff? Are you successful at tidying your house (and keeping it that way)? Do you have any secrets to share?

10 comments on… “Confessions of a Recovering Slob”