A Letter from John Lennon 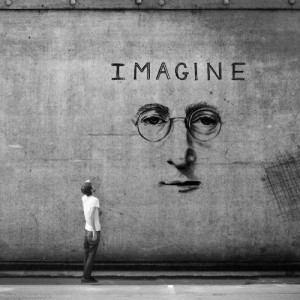 Many years ago I received a letter from John Lennon. Okay, I didn’t really. But Danny Collins did. In the film, Danny Collins (which is based on a true story), Al Pacino is a hard-living, aging rocker still making the circuit and playing the same cheesy songs he’d written thirty years before to a crowd of…mature women.

Forty years after it was written, Danny receives this letter from John Lennon (who read an interview with Chime magazine where Danny is clearly uncomfortable hearing the interviewer say that he will one day be rich and famous, and have more women than he’ll know what to do with):

Yoko and I read your interview. Being rich and famous doesn’t change the way you think. It doesn’t corrupt your art; only you can do that. So what do you think about that Danny Collins? Stay true to your music. Stay true to yourself. The rest will follow. My phone number is below. Call me. We can discuss this. We can help.

After reading the letter, Danny asks himself: Imagine what would’ve happened if I’d gotten that letter when it I was supposed to?

The movie got me thinking about what I might’ve done with my life if I had received my own letter from John Lennon. Before I became an accountant. The letter would’ve said something like this:

Remember all those nights as a girl, when you were crowded around the television with your sisters and pretending to watch Gilligan’s Island, Bewitched, or I Dream of Jeannie but were Imagining some fantastic story or another in your head instead? Rather than going to secretarial school, or nursing school, or studying for some other career that society expects of young women today, set those characters who roam around in your head and scream at you to write their stories free. Study creative writing and start telling their stories. One day you’re going to be an amazing story teller. I just know it. My phone number is below. Call me. We can discuss this. We can help.

Now, don’t get me wrong. Being an accountant, if not a particularly creative profession, is a noble one. It has afforded me many opportunities and has provided me a comfortable living. I have no regrets. There is nothing about my life I would change right now.

But in the next life, John, could you send the letter a little sooner?

And this got me to thinking about what John Lennon might say to my daughter, who will be heading off to college next year. I think it would say something like this?

You are a beautiful spirit and the world is your oyster, as they say. It’s hard when you’re young to know what you want to do with the rest of your life. My best advice is to Imagine all the possibilities. Try everything (at least) once and then, when you figure out what rocks your world, find a way to make a living at it. Don’t worry about the money. Trust me, it will come when you’re doing something that comes from your soul.

PS Do you even know who I am?

What about you? What would John Lennon have said to you?

4 comments on… “A Letter from John Lennon”