He’s Still The One

All my life, I’ve worn my heart on my sleeve. I’ve given it away easily. Have loved a lot. Sure, I’ve been hurt. But that’s the risk of loving someone. Isn’t it?

The problem was, no matter how many times I gave my heart away, I’d never found the one.

And then, in March of 2001, I was standing my mother’s bedside when she removed her oxygen mask, took my hand and looked deeply into my eyes. She hadn’t spoken in days, and we all knew she didn’t have much time.

“I’m sorry about Jim,” she said. Jim was someone I dated for a year. Great guy, just not the one for me. We’d broken up a few months before. “But one day soon you’re going to meet that special someone who will love you for the rest of your life.”

She squeezed my hand. “Trust me.” As it turned out, they were the last words she ever spoke. She went to heaven two days later.

Two months after my mother died, my sister Marianne called me. “I met the guy for you today,” she said. It bears mentioning that my sister was a dental hygienist at the US Coast Guard base in Petaluma, California.

But I was deep in grief. I was not interested.

“You don’t understand,” she said. “When he sat down in my chair, the picture of Mom I keep on the top shelf in my office clattered to the ground. The hair on my arms stood up and I heard Mom say, ‘this is the guy for Suzanne.’”

My sister had my attention now.

Up to this point, I had never told anyone about my mother’s final message to me. When I told my sister, she was flabbergasted. So was I, frankly, because my mother had served her country honorably during World War 2. In the United States Coast Guard.

It came as no surprise to me that my mother would send me someone in the very branch of service in which she’d served. It was the happiest time of her life.

Over the next few weeks I exchanged several emails with the guy my mother chose for me. I felt an immediate, unexpected connection to him. He felt it, too. 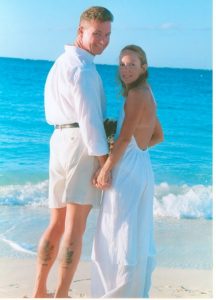 In the fifteen years we’ve been together we’ve endured many hardships. We’ve laughed and cried. We’ve fought and made up. We’ve traveled, run marathons and adopted a menagerie of pets. We’ve helped raise a beautiful and amazing child. We’ve held each other up and supported one another in every way imaginable. We’ve become best friends.

And so on this, my husband’s 54th birthday, I can honestly say, you’re still the one!!

Posted in:
bookmark the permalink