Who Are You, and What Have You Done With the Real Me? → 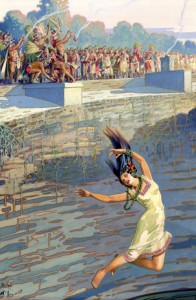 On our recent trip to Kauai, my husband had the brilliant idea to drive to the western most part of the Island to watch the sunset. Polihale State Park is located just a mile or two up the road from the Pacific Missile Range Facility where we were staying, so I was game.

Once we reached the turn off, it was a 4.8 mile drive on a dirt road riddled with pot holes. Big ones. After driving past a rear bumper and a muffler lying in the middle of the road, I said nothing. He swerved from one side of the road to the other in order to miss the deepest craters, teetering on the precipice of a deep ravine alongside the road.

And still I said nothing (except my prayers).

But when we passed a pickup truck with a bunch of locals standing in the bed of the truck toting hunting rifles, I finally spoke. “Um, honey, are you sure it’s safe out here?” “Oh, come on,” he said, “Where’s your sense of adventure?”

My daughter in the back seat chimed in. “Yeah, come on, you only live once you know.” “Maybe, but that’s no guarantee it’s going to be a long one,” I said. “I mean, have you ever seen an episode of Hawaii 5-0? Pasty white Hauloe’s like us get killed every week!”

“Well, you can always blog about it,” my husband said. My eyes widened and a slow smile tugged at my mouth. “Okay,” I said quietly.

With five minutes to spare before the sun actually set we reached the end of the road. As we began to climb the sand dune that would deliver us to our fate, I noticed a rather large footprint in the sand.

I looked nervously at my husband. “Sasquatch,” he said and our eyes met. But when we crested the dune and took in the sight before us, all thoughts of becoming the next victim to be sacrificed to the volcano evaporated.

Three minutes and plenty of mosquito bites later, the light show was over and all my fears had melted into the sea.

If you’re ever on Kauai, buy yourself a kidney belt and check this place out. It is truly one of Kauai’s hidden treasures.

I love hearing from you. And to prove it, for every comment you leave, you’ll be entered into a drawing. At the end of the month, I will draw a lucky winner who will receive a $10 gift card (your choice, Amazon, Starbucks or iTunes). Winners will be announced in the first post of the following month.

Tags: things to do in Kauai, Kauai’s best kept secrets, Kauai hidden treasures, sasquatch, you only live once

10 comments on… “Sacrificial Virgin Wanted: Stupid Tourist Will Do”

Who Are You, and What Have You Done With the Real Me? →