The Gift of Fear: Déjà vu or Reincarnation? →

The Gift of Fear: Becoming Friendly with Your Fear

Fear can undo even the best of us. But it can also teach us a lot about ourselves if we are willing to look deeply enough.

My fear of death began as a child. I used to lay awake at night and imagine being buried in the ground forever. And EVER. I guess in my child’s mind I assumed I would be awake, or at least aware, of what was going on, and the thought terrified me beyond measure.

I’ve always believed it God, even went to church and Sunday school as a young girl, but apparently I missed the part about how—when you die—your soul leaves your body and goes to heaven. Or maybe by then my fear was too deep-seated and those discussions were too scary. Or maybe (and this is very possible), because I was just a kid, I wasn’t paying attention.

But my fear led me to a lifetime exploration for something more. From the time I was a teenager I began to read books on various religions, spirituality, pretty much any self-help book I could get my hands on. But nothing quelled that paralyzing fear inside me.

So great was my fear that I could not—would not—have a conversation about death with anyone (at least not without having a full-on panic attack). I wanted, more than anything, to believe that when I die my soul would leave my body and go to heaven, but then that fear of lying in the ground for eternity would rush back up to greet me. And so, when my husband suggested we have our wills done? No way. It was never going to happen.

And then a couple of amazing things happened.  First, in 2008, I read the book A New Earth, by Eckhart Tolle. This book was a life changer for me. I read it over and over and eventually bought the book on tape, to which I’ve listened at least a hundred times. The book is filled with so much wisdom, but in terms of living with my fears, the most significant piece of advice was simply learning to acknowledge that there is fear in me.

Yep, I would say over and over, there it is. That fear of death. Eventually, by the simple act of acknowledging it, the fear lessened its grip on me.

I then took things one step further and told my friend and carpool partner, Elizabeth, about my fear.  As it turns out, my girlfriend has NO fear of dying and so we ended up having many discussions about death and what happens afterward.

After a while, I began to talk more openly about death. I told my husband to go ahead and make an appointment to have our wills and living trust done. I even told him what I would like done with my remains when I die (this was HUGE). 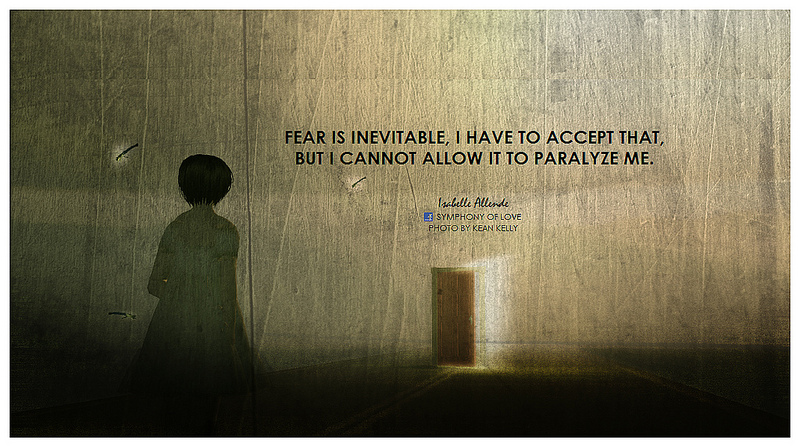 It wasn’t a perfect solution because the fear was still there, I just refused to let it have such an important place in my life. After all, if I spend my life being afraid of dying, how is that really living?

What about you? What’s your biggest fear? I love hearing from you. And to prove it, for every comment you leave, you’ll be entered into a drawing. At the end of the month, I will draw a lucky winner who will receive a $10 gift card (your choice, Amazon, Starbucks or iTunes). Winners will be announced in the first post of the following month.

Please tune in next Tuesday for The Gift of Fear: Déjà vu or Reincarnation?, where I’ll talk about how I actually overcame my fear of death.

4 comments on… “The Gift of Fear: Becoming Friendly with Your Fear”

The Gift of Fear: Déjà vu or Reincarnation? →