My Night With David Cassidy →

The Joy of Forgiveness 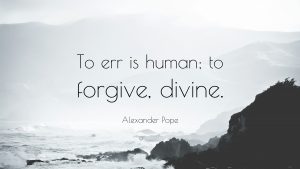 Recently I was challenged with making a list of ten things a person should rush to do, the theory being that nothing else should be rushed. It wasn’t an easy task, but it was enlightening.

After completing my list, I vowed that I would try to live by it. I would rush to do the ten things on my list (though God forbid I’m not soon tasked with saving a life or putting out a fire). I would not rush anything else.

The first item on my list was to Forgive. As it often does, the universe responded to my self-imposed challenge by providing the perfect opportunity for me to put my promise to the test. Here’s what happened.

Last week, my husband and I took our dog, Max, to see an orthopedic surgeon (he has bum knees) for a surgery consultation.  As is customary with any type of doctor visit, we went through the list of medications that Max was on.

Now, the previous weekend we’d taken our little boy to our regular vet for an infection on his…Boy Part. We told the surgeon what medications our vet had given Max for his…issue, as well as the regular medications he takes.

The next words out of the surgeon’s mouth were, ”I don’t want to alarm you, but…”

As it turns out, the medication we give Max for his bum knees was not documented in his chart at our regular vet’s office. Subsequently, she prescribed two additional medications in the same classification.

“…we call it the triangle of death,” the surgeon said, and went on to explain that, by being on these three medications for the past five days, our precious boy was now in danger of a host of complications, not the least of which were a perforated ulcer and kidney failure.

Our first reaction was fear. The second? Anger.

These are normal reactions. I know this because I’ve watched enough medical dramas on television. Except, none of those patients were my little boy.

We left with instructions on what to look for, what we should do to help Max detox from the overdose, and a promise that he would alert our regular vet to the situation.

Two days later, we received a call from our vet’s office. When I saw the caller ID, I reached for the phone, then hesitated before I picked up. In those seconds, a few thoughts went through my mind.

First, I was still processing my feelings about the situation and I wasn’t sure I was ready to speak to her yet. Second, my husband’s admonition not to “acquiesce” too easily (he knows me well :). Third, I remembered the vow I’d made to live according to my list.

And I picked up. 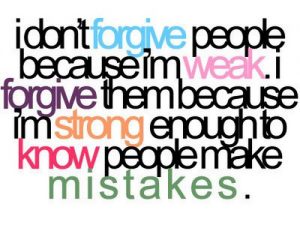 I knew because I could hear it in her trembling voice. I could feel her pain, and I wanted so badly to reach through the telephone line and hug her and tell her it was okay. That I forgave her, because I did. Too easily? Perhaps. But here’s the thing I realized in the moment that forgiveness entered my heart:

To forgive is to recognize another’s humanity as your own.

I’ve made my share of mistakes in life. Done things that have hurt other people. Who hasn’t? It’s part of being human. Some I’ve hurt have forgiven me. Some not. But here’s what I know:

The following day we had to take Max back to see the vet. He’d thrown up for the third time in four days. When the vet walked into the room, her eyes filled with tears. I rose to hug her. My husband—who hadn’t spoken to her and thus, until that very moment, had not fully arrived at a place of forgiveness—hugged her to. And all was forgiven.

We’re not out of the danger zone with our little boy yet, but our vet is doing everything humanly possible to ensure he gets there. And we have every confidence that our furry children will continue to receive excellent care from her.

What about you? Do you rush through your life? If you were tasked to make a list of things you should rush to do, what would be number one?

2 comments on… “The Joy of Forgiveness”

My Night With David Cassidy →