A Mere Coincidence? Me Thinks Not. →

The Gift of Fear: Returning to our Spiritual Roots

Over the past couple of weeks I’ve talked about fear. I talked about becoming friendly with our fears, and how I overcame my intense fear of death. Today I want to talk about how fear can be a reminder to us that we are not living the lives we were meant to live.

Though my fear of death is now behind me, I still grapple with fear, mostly surrounding my health.  In a previous post, I joked about being a hypochondriac (see Hypochondriac’s Unite), but this past summer I was faced with a serious health condition.

On July 30th I had a bilateral mastectomy. The surgery was painful (obviously) and the recovery was fraught with complications, some more serious than others. For weeks on end, it was literally one thing after another. I began to wonder if I would ever feel like myself again.

Before the surgery I worked full time, worked out regularly, and practiced meditation. I tried my best to focus on the present moment, stepping outside my thoughts as often as I remembered to do so. I was calm. Peaceful. Centered.

But during the two months I was home, I was alone much of the time and I became focused on my pain. Even when I had a good day, I wondered what was going to happen next. And by the time I returned to work, I was I was fraught with apprehension.

Was I ready? Would something else go wrong? I’d lived in a quiet little bubble for so long that even the slightest stimulation caused me extreme anxiety. And, when I tried to return to work two years ago after a long bout with pneumonia, I ended up in the emergency room. Twice. The first time via ambulance.

Would the same thing happen again?

Luckily, it didn’t. The first day back to work was good. So was the second. But then, about a month after returning to work—when the pain was pretty much gone (with tissue expanders there is always some level of pain)—I realized that I was still worrying, certain that something else would happen.

Over the past few years, since I discovered Eckhart Tolle’s A New Earth and began applying it’s spiritual principles in my life, I’ve come to learn that when I feel out of sorts, when I start to live inside my head, letting my thoughts control me, I know it’s time to reconnect with my spiritual roots. To get reconnected with the world around me. 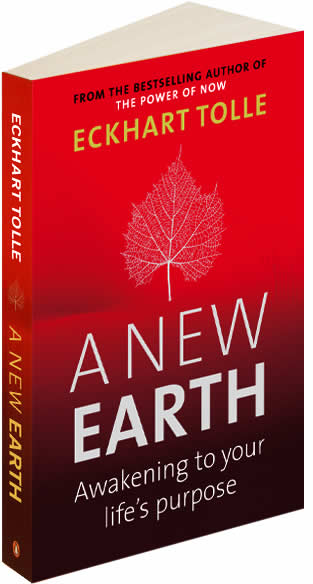 And so, I dusted off the audio version of A New Earth, popped it in the CD player, and an instant calm came over me. I once again began noticing the outside world, in all its’ autumnal splendor, and I stopped worry about what might go wrong.

It still amazes me what a powerful force fear can be in our lives. It can keep us from living the life we should be living. Lives that are filled with joy and a sense of calm despite the hectic, fast-paced world in which we live.

Let fear be a reminder to all of us that we are more than our thoughts and that, when our thoughts begin to control our lives and we lose our sense of balance, it’s time for a walk in nature, or a yoga class, or whatever it is that brings you peace.

What about you? How do you keep a sense of calm and well-being in this crazy, hectic world? I want to know! I love hearing from you. And to prove it, for every comment you leave, you’ll be entered into a drawing. At the end of the month, I will draw a lucky winner who will receive a $10 gift card (your choice, Amazon, Starbucks or iTunes). Winners will be announced in the first post of the following month.

8 comments on… “The Gift of Fear: Returning to our Spiritual Roots”

A Mere Coincidence? Me Thinks Not. →