← Life From the Rearview Mirror

Cranky Pants or The Return of Dr. Evil? → 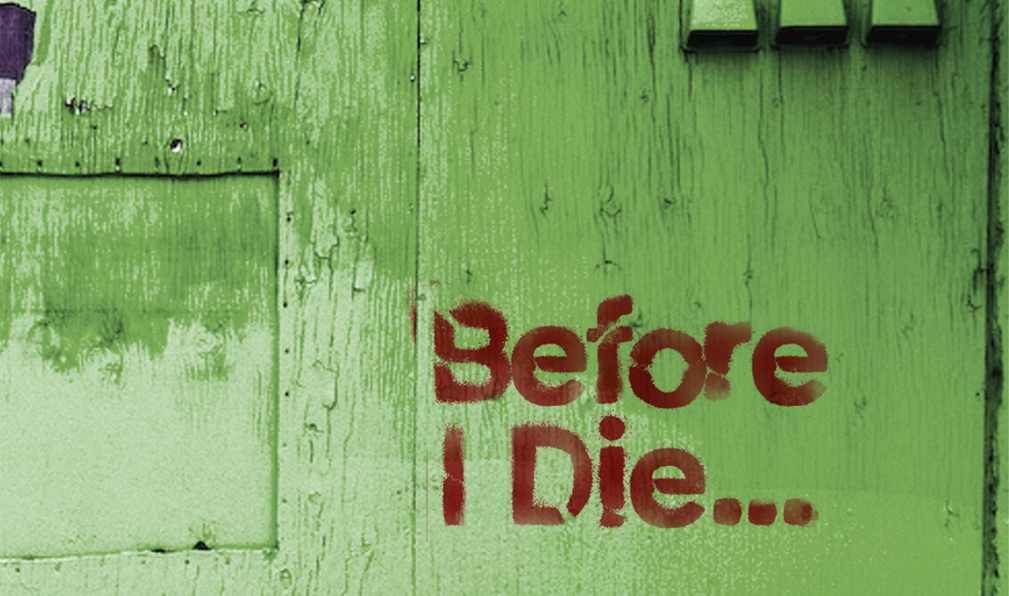 A few years ago, as I was driving home on New Year’s Eve, I heard this essay read on the radio. I was so mesmerized by its words that I pulled over to the side of the road and listened intently. I hope you will enjoy it as much as I did (and still do). It’s a little long, but trust me, it’s worth the time to read in its entirety.

The following essay was written by Edmund N. Carpenter, age 17, in June 1938 while he was a student in Lawrenceville, N.J. Carpenter would go on to win the Bronze Star for his service in World War II and to a civilian career as an attorney. A graduate of Harvard Law School, he became president of Richards, Layton & Finger, a law firm. He died on Dec. 19, 2008 at age 87 and is survived by six children and 15 grandchildren:

It may seem very strange to the reader that one of my tender age should already be thinking about that inevitable end to which even the paths of glory lead. However, this essay is not really concerned with death, but rather with life, my future life. I have set down here the things which I, at this age, believe essential to happiness and complete enjoyment of life. Some of them will doubtless seem very odd to the reader; others will perhaps be completely in accord with his own wishes. At any rate, they compose a synopsis of the things which I sincerely desire to have done before I leave this world and pass on to the life hereafter or to oblivion.

Before I die I want to know that I have done something truly great, that I have accomplished some glorious achievement the credit for which belongs solely to me. I do not aspire to become as famous as a Napoleon and conquer many nations; but I do want, almost above all else, to feel that I have been an addition to this world of ours. I should like the world, or at least my native land, to be proud of me and to sit up and take notice when my name is pronounced and say, “There is a man who has done a great thing.” I do not want to have passed through life as just another speck of humanity, just another cog in a tremendous machine. I want to be something greater, far greater than that. My desire is not so much for immortality as for distinction while I am alive. When I leave this world, I want to know that my life has not been in vain, but that I have, in the course of my existence, done something of which I am rightfully very proud.

Before I die I want to know that during my life I have brought great happiness to others. Friendship, we all agree, is one of the best things in the world, and I want to have many friends. But I could never die fully contented unless I knew that those with whom I had been intimate had gained real happiness from their friendship with me. Moreover, I feel there is a really sincere pleasure to be found in pleasing others, a kind of pleasure that can not be gained from anything else. We all want much happiness in our lives, and giving it to others is one of the surest ways to achieve it for ourselves.

Before I die I want to have visited a large portion of the globe and to have actually lived with several foreign races in their own environment. By traveling in countries other than my own I hope to broaden and improve my outlook on life so that I can get a deeper, and more complete satisfaction from living. By mixing the weighty philosophy of China with the hard practicalism of America, I hope to make my life fuller. By blending the rigid discipline of Germany with the great liberty in our own nation I hope to more completely enjoy my years on this earth. These are but two examples of the many things which I expect to achieve by traveling and thus have a greater appreciation of life.

Before I die there is another great desire I must fulfill, and that is to have felt a truly great love. At my young age I know that love, other than some filial affection, is probably far beyond my ken. Yet, young as I may be, I believe I have had enough inkling of the subject to know that he who has not loved has not really lived. Nor will I feel my life is complete until I have actually experienced that burning flame and know that I am at last in love, truly in love. I want to feel that my whole heart and soul are set on one girl whom I wish to be a perfect angel in my eyes. I want to feel a love that will far surpass any other emotion that I have ever felt. I know that when I am at last really in love then I will start living a different, better life, filled with new pleasures that I never knew existed.

Before I die I want to feel a great sorrow. This, perhaps, of all my wishes will seem the strangest to the reader. Yet, is it unusual that I should wish to have had a complete life? I want to have lived fully, and certainly sorrow is a part of life. It is my belief that, as in the case of love, no man has lived until he has felt sorrow. It molds us and teaches us that there is a far deeper significance to life than might be supposed if one passed through this world forever happy and carefree. Moreover, once the pangs of sorrow have slackened, for I do not believe it to be a permanent emotion, its dregs often leave us a better knowledge of this world of ours and a better understanding of humanity. Yes, strange as it may seem, I really want to feel a great sorrow.

With this last wish I complete the synopsis of the things I want to do before I die. Irrational as they may seem to the reader, nevertheless they comprise a sincere summary of what I truthfully now believe to be the things most essential to a fully satisfactory and happy life. As I stand here on the threshold of my future, these are the things which to me seem the most valuable. Perhaps in fifty years I will think that they are extremely silly. Perhaps I will wonder, for instance, why I did not include a wish for continued happiness. Yet, right now, I do not desire my life to be a bed of roses. I want it to be something much more than that. I want it to be a truly great adventure, never dull, always exciting and engrossing; not sickly sweet, yet not unhappy. And I believe it will be all I wish if I do these things before I die.

As for death itself, I do not believe that it will be such a disagreeable thing providing my life has been successful. I have always considered life and death as two cups of wine. Of the first cup, containing the wine of life, we can learn a little from literature and from those who have drunk it, but only a little. In order to get the full flavor we must drink deeply of it for ourselves. I believe that after I have quaffed the cup containing the wine of life, emptied it to its last dregs, then I will not fear to turn to that other cup, the one whose contents can be designated only by X, an unknown, and a thing about which we can gain no knowledge at all until we drink for ourselves. Will it be sweet, or sour, or tasteless? Who can tell? Surely none of us like to think of death as the end of everything. Yet is it? That is a question that for all of us will one day be answered when we, having witnessed the drama of life, come to the final curtain. Probably we will all regret to leave this world, yet I believe that after I have drained the first cup, and have possibly grown a bit weary of its flavor, I will then turn not unwillingly to the second cup and to the new and thrilling experience of exploring the unknown.

My hope is that this year, as you sit down to make your list of resolutions or goals for the New Year, you’ll think about what matters to you. Search deeply within yourself and think about the person you want to be one year from now. Five years from now. At the end of your life.

Here’s to a fulfilling new year filled with health and adventure!

← Life From the Rearview Mirror

Cranky Pants or The Return of Dr. Evil? →