Olga Kotelko and The Fountain of Youth →

Cranky Pants or The Return of Dr. Evil?

I don’t believe in New Year’s resolutions. I personally feel that making resolutions is just another way to set myself up for failure. I did set some goals for my writing, but I think of goals more as something to strive for than to actually achieve. Ergo, if I don’t make all my goals, I have not failed. I will celebrate the successes I did actually have.

I did, however, make one vow to myself: I would try to be more kind and compassionate when faced with extreme stress or disappointment. And here is it, the second day of the New Year, and I have failed. Epically.

Am I to blame for losing my cool at the gym today, or have I been re-possessed by Dr. Evil? Let’s take a look at the evidence.

First, an underlying current of negativity has been stalking me all week, even before the New Year arrived with no apparent cause.

Second, I confirmed with Renata at the gym on Tuesday that the new yoga instructor would be starting on Thursday. Now, let me point out—and this is important—that the type of yoga we practice is an intense form of Vinyasa yoga. We leave class sweaty and trembling from the workout.

And so, when I showed up for yoga today at 6:00AM and was told that the format of the class had changed from Yoga to Power Pilates, I was not a happy camper. I marched (stomped, really) out to the front desk and had a word with Ms. Renata, who informed me that I’d need to speak to the Group Exercise Director. 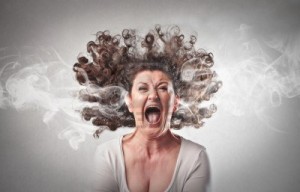 And then, because the only foot attire I’d worn was my Ugg boots, I decided I might as well do the Power Pilates class. Just this once. And after 15 minutes of stretching our toes (seriously), I left, a trail of smoke fanning out behind me.

And later this morning (it was around 10:30), when I called to speak to Jenna? Right, she wasn’t in yet. So I left her a lovely little message. I wonder if she’ll actually call me back.

What do you think? You be the judge. Have I completely and utterly failed at my vow to be kind and compassionate in the face of disappointment, or have I in fact been re-possesed by Dr. Evil?

5 comments on… “Cranky Pants or The Return of Dr. Evil?”

Olga Kotelko and The Fountain of Youth →