← A Mere Coincidence? Me Thinks Not.

The Incarnated Soul of Walter Mitty →

Bullying is the use of force, threat, or coercion to abuse, intimidate, or aggressively to impose domination over others. Bullying consists of four basic types of abuse – emotional (sometimes called relational), verbal, physical, and cyber.  More complex bullying in which the bully may have one or more “lieutenants” who may seem to be willing to assist the primary bully in his or her bullying activities. ~ Wikipedia

I’ve always been a champion of the underdog. When I was in high school I got suspended for fighting with the class bully. It happened like this.

While playing volleyball in gym class, the Mean Girl began to make fun of a physically and mentally challenged student because she was having difficulty serving the ball.

I told Mean Girl to stop bullying the girl. Her response? “What are you going to do about it?” My response? “Keep it up and you’ll find out.”

Mean Girl kept it up.

Up to this point, Mean Girl and I had been adversaries on the soccer field and the basketball court, but the rivalry had never gotten physical. But that day it did.

In the locker room I decided to let the issue go and went about changing my clothes. And then Mean Girl called me a name I will not repeat.  I turned around slowly, craned my neck upward to meet her glare, and decked her.

Mean Girl fell backward over the bench, but in one fell swoop she leapt up and attacked me. Moments later the gym teacher came in and hauled us both to the principal’s office. We both received a three-day suspension.

My parents were not happy with me for getting suspended, but when they learned that I’d taken on the class bully to defend the underdog, they did not punish me. 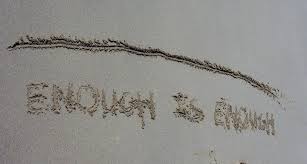 Now, like then, I am compelled to draw a line in the sand and choose a side. I don’t have to. I could choose to be Switzerland and stay neutral, but then I wouldn’t be standing up for my principles. One of which is to fight (metaphorically now, I’ve long since put the boxing gloves away) for what’s right. And now, like then, I choose to take the side of the underdog.

And who, you ask, is the underdog?  My sister.

And the bully?  One of my other sisters.

I’ve long since known my sisters, Prickles and Moon Flower, were on the outs (names have been changed to protect their identities). Once the very best of friends, they had a falling out and haven’t spoken to each other in years.

Prickles then imposed her domination over a group of other family members who joined forces in hatred for Moon Flower. Most recently, and most painfully, Prickles recruited another lieutenant, Moon Flower’s nearest and dearest friend, our sister, Nandinia.  Nandinia in turn recruited her daughter against Moon Flower, launching a final, devastating blow against Moon Flower.

And then, as if to proclaim her victory, Prickles sent out a group email to everyone in the family, officially proclaiming the collective hatred for Moon Flower and letting her know in no uncertain terms that she is not welcome to step foot anywhere near her or any of her soldiers.

The email arrived in my box an hour after I received a phone call from Prickles telling me how much she loves me and what an amazing sister I am. This phone call was followed by an email from Nandinia saying the same thing.

Let me make it perfectly clear which side of the line I’m on. I stand with Moon Flower. I know her. I’ve fought with her many times over the years. And one thing I know to be true is this. Her heart is pure. She may say something that hurts you (don’t we all at times), but she is very loving and very caring. And she is suffering immensely from the hatred directed at her.

I don’t know what happened between Prickles and Moon Flower, but nothing justifies the level of hatred that has been sown against Moon Flower. And I have no place in my life for people who hate. Who are incapable of forgiveness.

Even if they are family.

What about you? Have you ever had to take sides between two people you care about? I want to know.

6 comments on… “Love, Loyalty and Bullying”

← A Mere Coincidence? Me Thinks Not.

The Incarnated Soul of Walter Mitty →