← Life on the Other Side

Letters, a History Lesson and a New Book 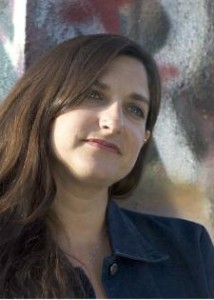 Today’s guest, National Bestselling Author Eileen Rendahl (writing as Eileen Carr), is here to talk about the inspiration behind her latest book, Un-Bridaled, one of seven novels included in the Sassy Seven box set. Seven Sexy, Stylish, Scintillating novels from some of today’s Top-selling Authors, available on pre-order for only $.99 (see link below).

Eileen has generously agreed to gift an electronic copy of the box set or a physical copy of Un-Bridaled (your choice). Just leave a comment below to be entered into the drawing.

And so, without further ado, I will turn things over to Eileen.

Hi! My name is Eileen and I’m one of Suzanne’s blog hijackers. We belong to the same fabulous group of romance writers in northern California and when she let us know she needed some help, I was happy to jump in. Especially when I found out why.

My sister and my mother are both breast cancer survivors. My aunt was not so lucky. I’ll do whatever I can to help anyone fighting this fight. So just for a second, let’s all close our eyes and send a big “Go, Suzanne!” out into the Universe.

Now, onto other topics. Several years ago, I cleaned my garage. Yes. It is that big a deal. I am, at best, an indifferent housekeeper and the garage is not even actually in the house! It had gotten, however, to the point where it was difficult to get our bicycles in and out. We live in a big bicycle town and that was simply not acceptable. Hence, a Sunday was committed to by the entire family for garage cleaning.

On one of the shelves, I found a box that had come with us from Arizona and was still unopened since last summer. Even I know when you haven’t touched something in four or five years and haven’t missed it, it’s time to toss it. But (and there’s always a but, isn’t there?) the box had belonged to my late husband. I couldn’t just put it in the bin without looking inside. 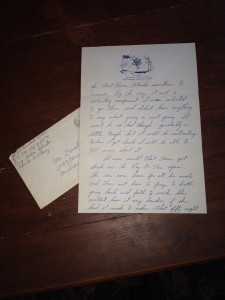 Most of what was in there was a collection of stuff from his office. There was one big manila envelope, however, that was stuffed full of other envelopes. Old yellow brittle envelopes. I pulled one out and opened it up. It was a letter from my late husband’s father back to his sister in the States during World War II. All of the letters were from him. They covered years and so much history.

Garage cleaning went on hold and we sat there in the garage opening envelope after envelope and reading them aloud. My kids, who are not exactly known for sitting still, were mesmerized.

This is one of the letters that sent chills down my spine. I knew he’d been part of the D-Day invasion so I knew what he was training for even though he didn’t when he wrote this letter:

Are we ever getting a workout down here. It’s sort of fun, though. We have something new and different every day. The amount of time that we spend in the water leads me to believe that I have been to sea more than most sailors. We train with these seven-man rubber boats. At first I didn’t think they could be tipped over but I sure underestimated the strength of the ocean.

In the end, I used those letters as the basis for a batch of letters found hidden in a wall in my novel Un-Bridaled. A novel that just so happens to be part of a boxed set available now for pre-order on Amazon and iBooks and other fine retailers. If you’re as intrigued as I am by old letters and hidden diaries, I hope you’ll give it a try!

About Eileen:
Eileen Rendahl is the author of three Chick Lit books: DO ME, DO MY ROOTS (2004) which was a double Rita finalist and a National Readers Choice Finalist, BALANCING IN HIGH HEELS (2005) and most recently, UN-BRIDALED. As Downtown Press’s Chick Lit with Heart girl, she strives in her novels to expose both the humor and pathos of life. Critics have said that her characters are “humorous, yet heartbreaking” as well as “funny and profound, endearing and absurd, outrageous and comforting, and very, very real” and that she puts them in “situations that at once make you laugh and make you a little sad”.

Eileen grew up in Lincoln, Nebraska, although she wasn’t born there. She was born in Dayton, Ohio, but moved when she was four and who remembers anything from before they were four? Except she does remember she was born at the Good Samaritan Hospital across the street from Baskin Robbins because they sent her a coupon for a free ice cream cone every year until she was twelve. Eileen makes a point of remembering anything that has to do with ice cream. Or chocolate. Or champagne.

After many moves (St. Louis, Boston, Chicago, Phoenix), many jobs (art gallery assistant, editorial assistant, copywriter, communications manager, graphic designer, ceramics studio slave) and a smattering of husbands (if you want the details on that, you will have to get her liquored up), she now writes and lives in Davis, California, with her two adorable children, her two annoying cats and one lovely man.

In addition to Eileen’s gift, for every comment you leave, you’ll be entered into a drawing to win a copy of my upcoming release, THE MANY LIVES OF JUNE CRANDALL. To increase your chance of winning, please subscribe to receive email notification of future posts (by entering your email address in the box above and to your right) and you’ll be entered into the drawing one additional time.

5 comments on… “Letters, a History Lesson and a New Book”

← Life on the Other Side